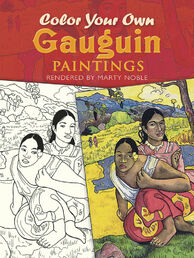 Widely regarded as one of the founding figures of modern art, French painter, sculptor, and printmaker Paul Gauguin (1848–1903) is also considered one of the greatest of the Post-Impressionists. A pioneer in stressing the simple and primitive in art, he produced works during his South Sea period that were richly colored and subtly modeled—a style that gradually emerged from the flat-contoured figures of his Breton interlude.For this coloring book, illustrator Marty Noble has prepared black-and-white line renderings of 30 of Gauguin’s finest paintings. Colorists can refer to the full-color reproductions of the actual paintings (shown on the covers) or add their own hues to each picture, including Tahitian Landscape, Spirit of the Dead Watching, The Moon and the Earth, Woman Holding a Fruit, Still Life with Three Puppies, The Cellist, and more.A wonderful introduction to the works of Paul Gauguin, this collection will delight coloring book fans as well as admirers of the great French artist.